Hundreds of different bus drivers probably pass in and out of your life, to whom you never give a second thought. It sounds sad when you put it that way, but that’s their job! Bus drivers are paid to get you where you need to go safely and (hopefully) quickly.

Have you ever wondered a little bit about the men and women who constantly handle the commutes of millions of individuals throughout the world? Check out a few of the fun facts there are to learn about bus drivers! 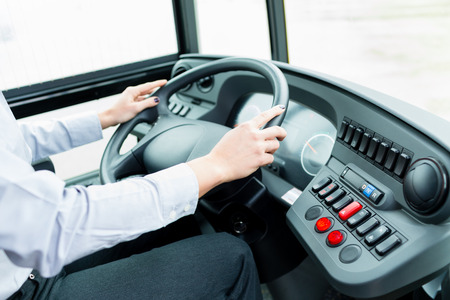 1.) It takes a lot of work to become a bus driver.

You’ve probably guessed that it takes a special license—a commercial driver’s license or CDL—to become a bus driver, but did you know there’s actually a lot more they need to do? Aside from the other certifications required, most drivers need to complete a series of tests to qualify for the position.

Depending on the location and company, some of these tests include video exams, psychological tests, and written evaluations too! Not to mention a thorough background check and then finally on-the-job training.

It’s scary—but it’s true! Long-haul bus drivers often have a very long and demanding schedule with few breaks. These intense working conditions cause them to become overtired and sleep-deprived, and sometimes a driver will catch themselves falling asleep at the wheel for a few seconds.

Some bus drivers have admitted to having hallucinations as well when they reach a certain point of exhaustion. In fact, these moments of semi-delirium are known as “black dog” periods in the bus driving community—named after a scene in a movie in which an extremely weary bus driver hallucinates a black dog in front of his bus!

School bus drivers sometimes accept small amounts of money or gifts from parents in exchange for breaking certain rules for their kids! It’s not anything crazy—an open drink here or an entertaining honk there—but it does happen. Sometimes the children bring little thank you gifts just because they want to, or ones passed along from mom or dad.

There’s a fun little prank a lot of drivers like to pull on one another to liven up the work day. When a driver drops off their bus and leaves, they have to leave the bus door open a little bit so they can get out of the vehicle. Some devious motorists shut the door completely on purpose and leave via the emergency exits—making it so the next driver has to wriggle his way through the emergency exits to get in!

5.) The job comes with seniority perks.

As in most professions, drivers who have been working longer earn more money—actually, a driver in the right city can sometimes make close to six figures with incentives and overtime. There are a few other industry-specific advantages, however, to putting in the miles. In some companies, drivers with seniority get to drive smaller, easier buses and vans instead of swinging large, crowded vehicles around the streets. These types of shuttles have fewer passengers and often come equipped with a monitor to help handle distractions taking place on the bus.

6.) A lot of bus drivers head to the movies in between shifts.

A bus driver’s schedule can be pretty staggered, especially if they work for a school district, leaving them with a sizable chunk of free time in the afternoon. Many bus drivers have said they like to use it to catch matinee shows!. What better way to spend time between shifts than with a popular movie without the crowds and for half the price? Unfortunately, they don’t get paid for crossing a movie off their watch list before an afternoon ride.

If you’re looking to upgrade the buses your drivers are using, or want to drive one on your own, Las Vegas Bus Sales has what you need. Choose from an excellent selection of new and used buses that bus drivers everywhere will be dying to take for a ride!